Bullying is not a topic only for children and schools. The human groups move around different interests and different personal forces that in the end cause that in some failures of the team the abuse arises. One of the reasons of demotivation in companies has come into a labor trend called mobbing, or better, psychological harassment.

Mobbing definitions indicates that it is “all unwanted conduct” that threatens the dignity of a person and creates “an intimidating, humiliating or offensive environment” at work. The requirement of good performance is not persecution or abuse, it is of course the minimum that must be done as a member of an organization.

The extreme is when we endure everything in the job because of a hierarchical order and although the line of respect is crossed, we become this behavior part of the culture.

In Colombia, there have been many cases such as that of Juan Carlos Forero in 2007, who committed suicide apparently because of the constant harassment to which he was subjected in the company where he worked.

For cases like this, everything related to workplace harassment was regulated in a more complete way, to prevent and punish those who threaten the dignity of employees at work.

The Decree 652 of 2012, determined as mandatory the establishment of Committees of Coexistence, to solve quickly the labor problems within private companies, as in public entities.

Workplace harassment in Colombian legislation is regulated by Law 1010 of 2006. It defines the facts that represent workplace harassment to prevent, correct and punish the various forms of aggression, mistreatment, inconsiderate treatment, offensive and any fact that outrages to the human dignity of workers.

Christopher L. Kukk, in his book “The compassionate achiever”. How helping others fuels success “, states that for decades it has been considered that the key to prosperity was to be number one, but recent research shows that in order to maintain success we have to be “compassionate winners“.

The author defines “compassion” as the holistic understanding of a problem or the suffering of others with the commitment to act, to solve the problem or alleviate suffering. The will to act is what distinguishes compassion from empathy. The empathy is the understanding of what the other person is experiencing, but for compassion this is not enough, the person has to act and to do something about it.

Compassion is commonly seen as a quality associated with “good” people, but only recently has the connection between compassion and success begun to be established. Success is defined as the fact of achieving a purpose and being a winner means different things for each person, but whether trying to get a promotion, get certain economic gains or status, for example, compassion will help us achieve our goals in a more efficient and rewarding way, since it will help us solve problems and create opportunities for others.

We have often heard that if we want to be successful in this life we ​​need to subscribe to the idea of ​ “the survival of the strongest” and that for being successful we have to grasp because if not, another will achieve it and snatch it from us.

Richard Dawkins in his book “The Selfish Gene” argued that humans are “clumsy robots” programmed by our genes to be selfish. Biologists, from Charles Darwin in his moment, until Humberto Maturana nowadays, contradicts this idea, since they argue that cooperation has been more important in the process of evolution of humanity than competition. Having a cooperative perspective more than a competitive mental pattern is more transcendent for a team’s success.

Darwin believed that compassion is a natural instinct that we all share. This approach has been supported, later, by research from different fields of knowledge.

WHAT IS AND WHAT IS NOT COMPASSION (Anecdote)

According to a recent article in EL TIEMPO newspaper and news website, Compassion is not feeling sorry for someone. Although in the West we associate compassion with pity for the suffering of another person. Pity generates rejection by implying a feeling of superiority of the one who has that feeling about the one who suffers.

Compassion means to maintain a kind attitude, of love and respect towards others and towards oneself. This attitude consists of the ability to recognize what another person feels, to be sensitive to their experience (empathy), together with the intention of alleviating the suffering of others and seeking welfare (altruism).

On the other hand Manuel Paz from Europa Press, two days ago (September 29th 2018) in his article: The incredible power of compassion and of thinking of others highlights that

Among its benefits are the improvement of the immune system and more positive attitudes.

A kind attitude, love and respect towards others has a positive effect on others, as well as emotional and psychological benefits for oneself.

The practice of cultivating compassion is being incorporated into a large number of therapies and medical and psychological programs throughout the world. In fact, more and more scientific studies are showing their benefits in physical and mental health, such as improving the function of the immune system and emotional regulation.

There are two kinds of compassion, which includes attachment and the expectation of receiving the same from the other and true compassion that is free from attachment.

Man is basically good and his nature is compassionate, says the Dalai Lama. Hundreds of scientific studies support this claim, indicating that aggressiveness and violent behavior is influenced by biological, social, situational and environmental factors; and every human being wants to be happy and be treated with consideration, respect and affection.

The only way to open up to others is to approach them with a compassionate disposition, creating a positive and friendly environment. This attitude opens the possibility of receiving affection and receiving a positive response from the other person. But people are waiting for others to act first positively instead of taking the initiative.

Other research conducted at the University of Michigan revealed that volunteering regularly increased dramatically the life expectancy of people doing this work and probably also increased their overall vitality.

Society is increasingly looking to businesses to embrace a wider responsibility beyond the limits of their own operations. There is an expectation that businesses will be proactive in developing solutions to social and environmental challenges and deliver the future we want.

Leadership development must support businesses to reframe their purpose, strategy and approach to value creation to achieve change at the pace and scale required. And there is growing understanding of the specific capabilities that are required to lead change at the level of whole systems, to reconcile profitability and sustainability.

Colombia presented a decline in human talent and went from position 64 to 68, within the ‘Global Human Capital Index 2017’, which is carried out by the World Economic Forum and which measures 130 countries. He received a general rating of 61.80, compared to 69.58 points he had obtained in 2016. The factors that affect this Index result in our country are the fewer job opportunities for people who have just graduated from university, the saturation of professional careers whose demand has decreased, salary gaps based on gender inequality, the timid decrease in laboral informality. That although there is some regulation to protect people older than 40 years, sometimes the experience is sacrificed for the “new knowledge”.

These indexes speak loud of the need for leaders who innovate in their Human Resources strategy.

You imagine that each one of us develop families, professional teams as Innovative leaders, but besides leaders with ethical values ​​that generate ideas, that improve the practice of their management and that improve the world.

What would happen if we ourselves becoming aware of these results caused by indifference, apathy before the pain of others, or in the face of our own arrogance foster our sensitivity and connect more with ourselves and with others?

I invite you all to be part of the solution, making small gestures such as practicing inclusion, equity and respect for diversity. 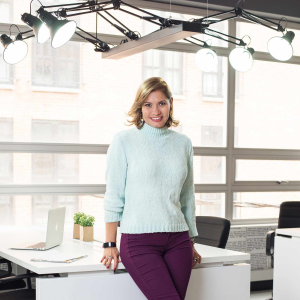